The Unity docs are still a work-in-progress. Some docs may be missing, or incomplete. If you would like to contribute to these docs, please submit PRs to the upstream repository here.

This introductory tutorial will help you build an understanding of what an HPC Cluster, or High Performance Computing Cluster is, and how to most effectively utilize it.

When working with HPCs, it can be helpful to understand what's happening behind the scenes. This tutorial will go over what an HPC is. A High Performance Computer--HPC-- is super computer that is made up of many powerful computers that are called Clusters. A Cluster is made up of powerful computer parts that are connected to each other over a local network--this is akin to the motherboard on your local desktop/laptop. But for the purposes of this tutorial, it suffices to think of a Cluster as powerful computer, structurally similar to your personal desktop/laptop at home, just a lot more powerful.

Keeping with this idea of your OS dictating the distribution of computer resources, let's examine how a Cluser distributes its resources for an uploaded job; a job is any operation or task you run on the cluster. When a job is loaded onto the Unity cluster, what is known as a scheduler determines what Cluster resources to give you, just like your personal computer's OS system would. You can picture the cluster as a scaled-up version of a single personal computer. Making up the cluster are Nodes. A Node is the part of the cluster that jobs get run on, like a GPU or CPU. When working with Clusters, it's easier to call these computer parts Nodes because sometimes just one of these computer parts is sufficient to run a job.

Here is a general step by step process that governs how the Unity Cluster works:

1. Connecting to the cluster

You can connect to Unity in two ways, an SSH connection (the standard linux console), or an instance of JupyterLab:

JupyterLab is the easiest to get up and going. To work with JupyterLab, it's a good idea to get aquainted with roughly how demanding the job you're uploading is though. You just need to be familiar with how roughly how many of each resource you will need (Image below). Most of the time you will only ever need a single CPU or GPU, but if you have terabytes of data to analyze, then you should probably consider getting multiple GPUs and CPUs.

When connecting the portal, click on JupyterLab tab located at the bottom of the options list on the left side of the window. This will take you to the JupyterHub for Unity, which looks like this: 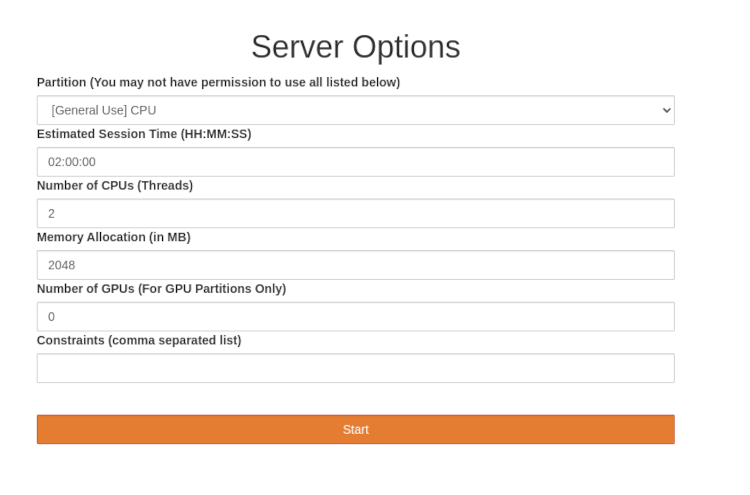 You will be asked to select what computer resources you want/need for the job you want to upload. Once you attempt to spawn your notebook and resources become available, you will be able to use JupyterLab as if it is running on your own computer.

SSH is the more traditional method of using an HPC cluster. You will connect to the login node of unity, and you will be responsible for starting your own jobs. This can be more useful than JupyterLabs for jobs that last a long time and must be left unattended, or to have much more refined control over the resources allocated for your job.

If you are on an SSH connection, you will have to manually request resources. Once you decide on what resources you want, you will submit that information to the scheduler, which will place you in a queue. If your resources are available immediately, your request will return right away, if not, you will be held in the queue until your requested resources become available.

Requesting resources in the cluster and all parameters allowed is discussed in more detail here.

Once the scheduler has started your job, it will run on some node in the cluster, using some resources that were defined by your parameters. It is not important what node the job runs on from the point of view of the client.

Once the job has finished, the scheduler will return whatever info you requested in your parameters.